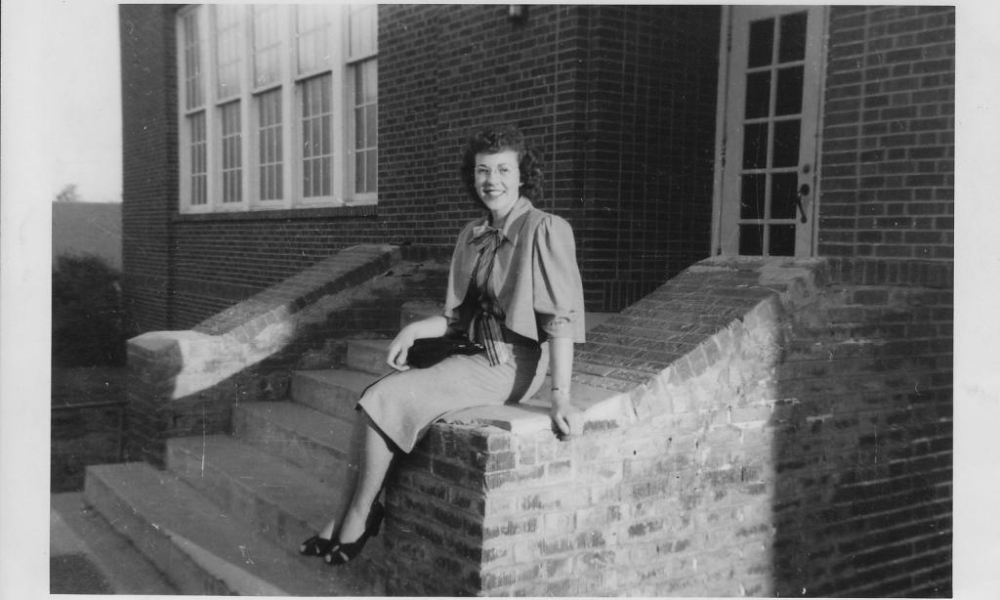 “My eyes fluttered open ten minutes before my alarm and for the first time in my life, I said, “I don’t want to go through this day.” Though I’m a pretty strong person and have no fear of speaking in front of a crowd, I wear my heart on my sleeve and cry at the drop of a hat. Today was my mother’s memorial service in Iowa and I wasn’t at all sure I could get through her eulogy without breaking down.

My sister and I had planned the service from beginning to end. As musicians and directors, we’d planned all kinds of services and events, just like our mother had over the years, and we both had our roles to play. My sister, Elaine, had spent years as a music teacher, so planning the music and poetry fell to her. I’d spent lots of time in hospitality, so preparing a suitable lunch was up to me.

After 85 years in North Dakota, Mom and Dad had moved to the senior independent living center in Elaine’s town in Iowa. Alzheimer’s Disease had veiled Mom’s mind for the past several years, so though her neighbors in the center were cordial to her, none of them really knew the mother we loved and respected so much. We’d always called her “The Hostess with the Mostess!”

Often when I was a child, for no apparent reason, Mom would get very busy cleaning, changing sheets, washing towels, and baking. Nothing extra was on the calendar but somehow she felt the need to “be prepared.”

“I just have a feeling someone’s going to come!” she’d say.  And sure enough, on a bright summer day, a car would pull into the farmyard and out would pile six or seven cousins, aunts and uncles, smiling and hoping we were completely surprised by their impromptu visit. Mom and Dad would usher them in and everyone would sit down to freshly made rhubarb pies and coffee, with my parents ready to act like the perfect hosts and everyone would get a big chuckle out of Mom’s “intuition.” Mom’s sixth sense became famous within the family and everyone knew she would always be ready to host any and everybody.

Everyone always knew they were welcome at my parents’ house. Mom’s most common phrase was, “Can I get you some coffee?” And of course, it was always accompanied with homemade cookies, donuts or pies. No matter how short their visit, no one ever left Mom’s North Dakota house hungry.

Mom and Dad continued to enjoy surprise visits from many, though they no longer called Mom’s intuitive knowledge a sixth sense. Over the years, they’d replaced the verbiage with a far more accurate phrase that demonstrated their deep dependence on a loving God and called it “Guidance.”

Now in her new more dependent life in Iowa, no one had eaten Mom’s home cooking. But any new friends that had graced her apartment had heard her ask, often more than once, “Can I get you some coffee?” Alzheimer’s may have stolen her stories but it had never robbed her servant’s gracious heart. Even now that she’d been transferred to a nursing home, she still offered to get folks coffee.

Last November, Dad had had to move Mom into that nursing home, 21 miles from the apartment they’d shared in Iowa. With his own failing health, he couldn’t go and see her every day but, in her own inimitable way, Mom always seemed to know when Dad was coming to visit her. The nurses noticed it at first–Mom would scoot to the front door in her wheel chair and watch the door. Within half an hour, in would walk Dad! There hadn’t been a phone call. He hadn’t made an appointment. She just knew he was coming. Soon the nurses came to expect Dad to walk in every time Mom would sit by the door, joking about her marvelous intuition.

In May, six months after Mom had been admitted there, my family drove to Iowa from our home in Texas to celebrate our nephew’s wedding, stopping midway for an overnight in a hotel. And that night, I had the most arresting dream! In it, I got a phone call from someone, saying, “Your mother is not doing well. You need to get there right away!” Then I saw Mom in a hospital bed, her face almost as white as her hair against the white hospital sheets.

The dream had been so vivid, I’d described it to my daughter and husband that morning as we got back on the road. But I was still completely stunned when my cell phone rang in the car just a few hours later. It was my sister. “Joanie, I just got a call from the nursing home. They say Mom’s been pretty unresponsive. They took a blood test and she’s drastically anemic. They’re taking her to the hospital as we speak.”

Though our home was 12 hours from that hospital, we were only two hours away when the call came! Hurrying straight there, we walked into the room, only to see Mom’s face as white as her hair against the white sheets, exactly as I’d seen it in my dream! I thought of Mom’s daily dependence on God and realized that only He could have brought us from our home 12 hours away to her bedside only two hours after her arrival at the hospital! Guidance!

What an incredible gift it turned out to be with Mom for those few days surrounding the wedding. Our children were there and we hugged her and sang hymns around her bed, each of us getting to say our goodbyes. God even gave us a time of conversation where she displayed more lucidity than we’d seen for many years, where we discussed her assurance of salvation and her readiness to go to be with Jesus.

Now only three weeks later she was gone, and we were planning her memorial service. I’d insisted that it wouldn’t be right to have her service without serving lunch and had planned and orchestrated it just like Mom would have liked. But the morning of her service was here and I didn’t think I could face the day. I rolled over for a few more winks before the alarm went off and instantly fell into one of the deepest most profoundly restful sleeps I had ever experienced–and dreamt!

I was standing, and suddenly Mom was on my left, still wearing her hospital gown, her white curly head coming just to my shoulder. Though she’d been quite tall, age and osteoporosis had shrunk her frame by several inches and now she looked up at me just as I remembered her from the hospital. Yet her touch was as firm as a 40 year old’s as she squeezed my shoulder and looked up at me with clear twinkling eyes. Then, with the strong clear voice I’d known as a child, she laughingly said, “You girls are doing such a nice job! And I’m so glad you’re serving lunch!” And just like that, she was gone!

I woke up laughing, reveling in the still tangible feel of my mother’s reassuring embrace on my shoulder! I could still hear her words in my ears, still see her laughing eyes! And I knew she was exactly where she had spent her entire life preparing to be–next to her Savior, enjoying every minute.

Suddenly I wanted to be at her memorial service! I wanted to tell her new friends about the woman I loved and respected, who’d taught me every important lesson I’d ever learned! I wanted them to know her like I did!

And I did just that! I sailed through the service with humor, laughter, honor and without tears! We shared my dream, served the lunch and laughed at her unexpected endorsement of the day. And I have never been so happy to use the words, “Can I get you some coffee?”

Written By Joan Wollschlager (my mother)  in honor of her mother’s 90th birthday.
Every time I set the table or journal a prayer I try to honor her.
I aspire to her grace, hospitality and spiritual tenderness.
We all have a story to tell. . . what’s yours?

“We are all apprentices in a craft where no one

How do you cultivate creativity? “The Artist Da

Having a garden this summer has taught me two impo

“The monotony and solitude of a quiet life stimu

“Love betters what is best.” -Wordsworth This

“I learned that courage was not the absence of f